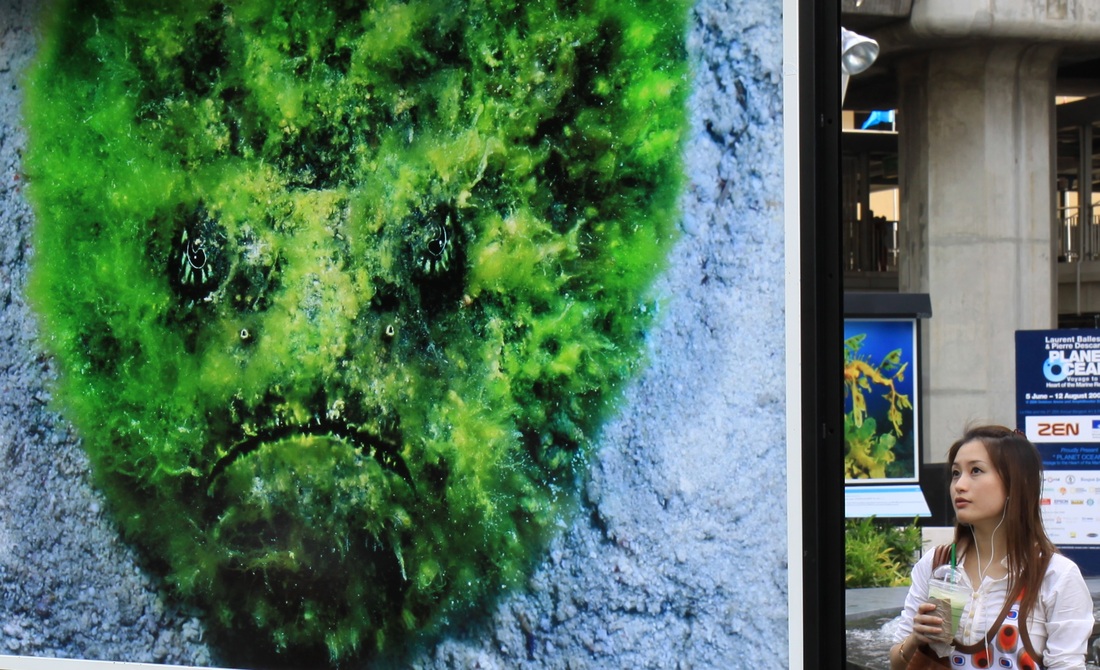 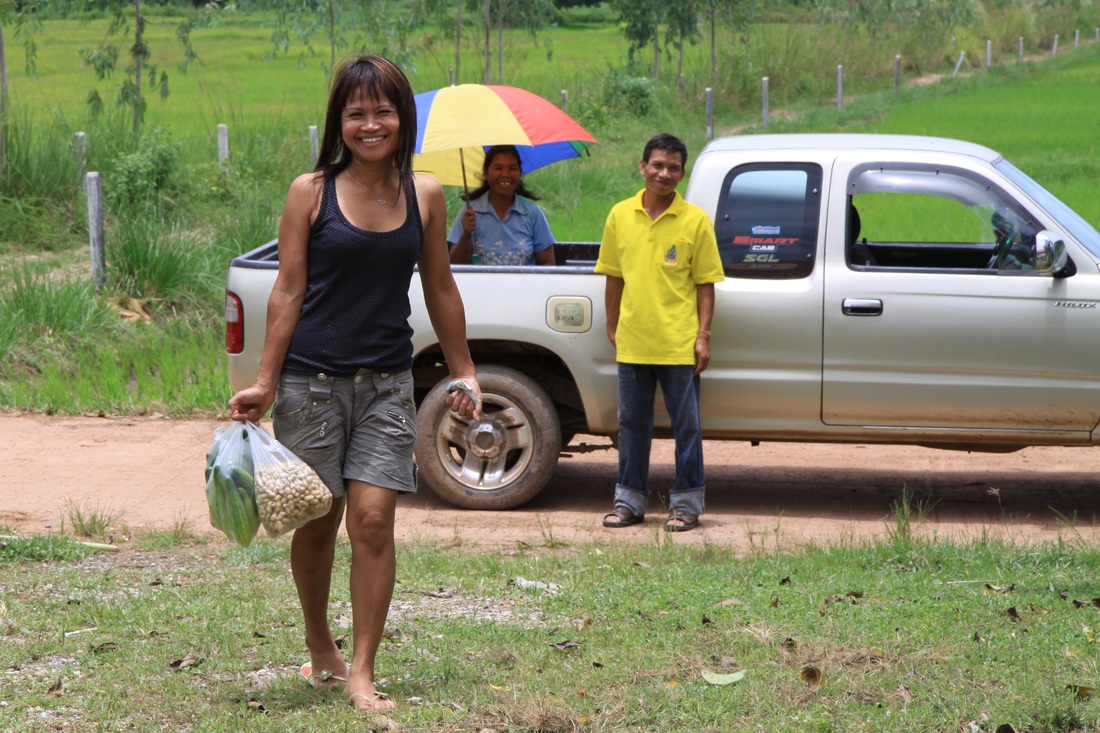 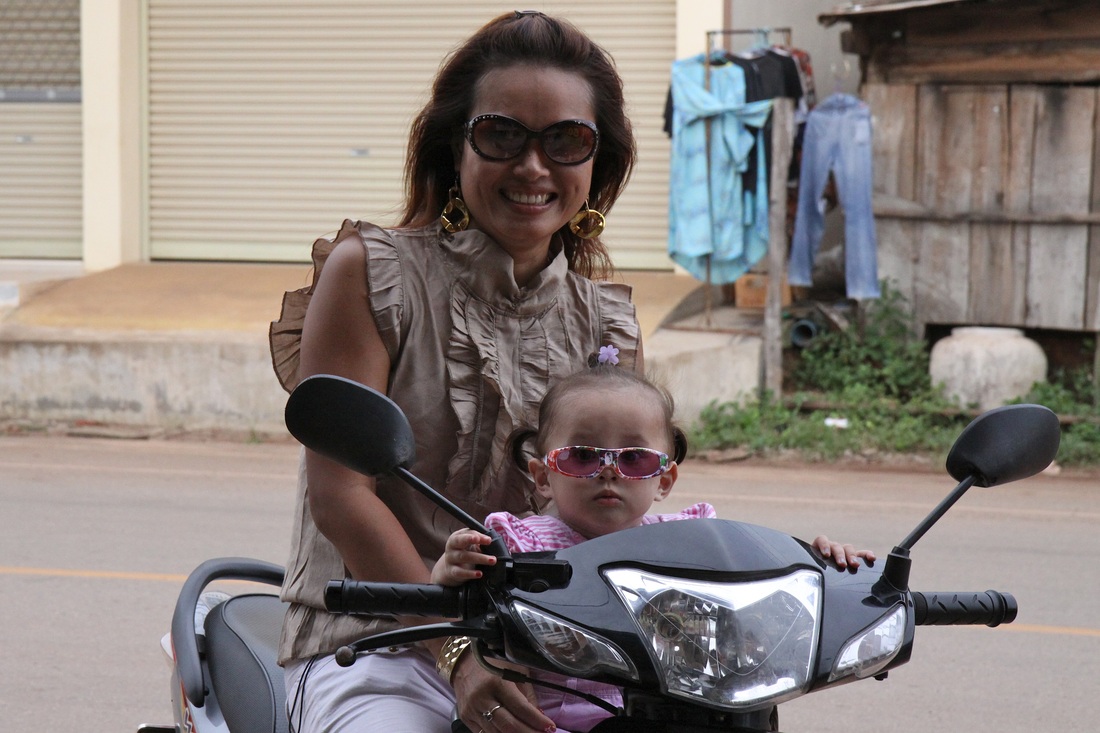 I sat outside the internet café waiting for Amporn. Suddenly this couple showed up on a motor bike and parked in front of me. They didn’t bother so much about helmets and other safety precautions, instead they had very fancy sun glasses. So they became the matching couple of the day! 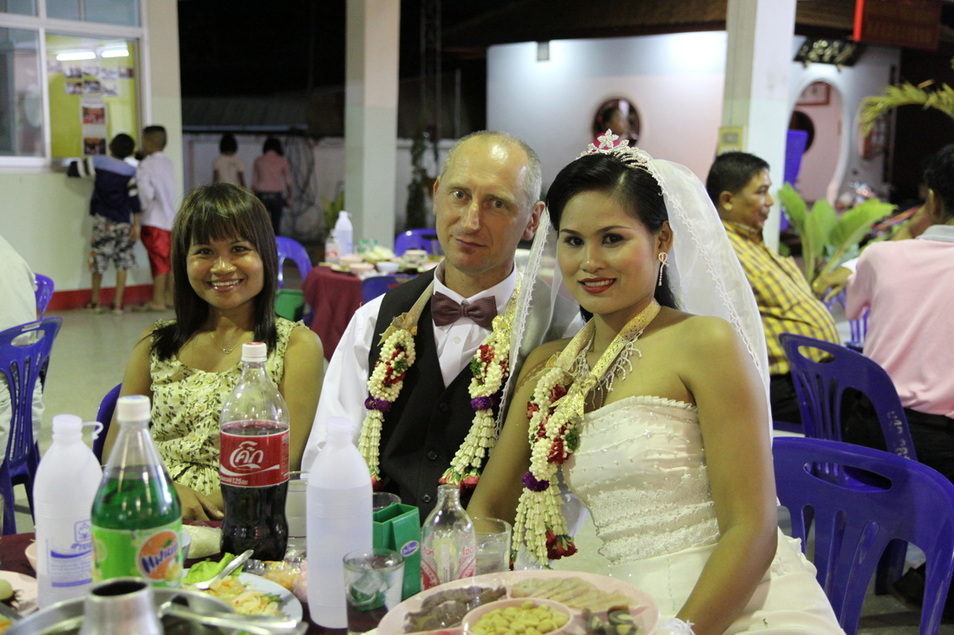 We were at a Thai wedding in Nong Bhua Lamphu, invited by some friends of Amporn. There  were many people celebrating the wedding couple, lot’s of food to eat and whisky and soda to drink. Later on the bridegroom looked a bit tired of attention from all the guests. I wish them all the best in their future life. 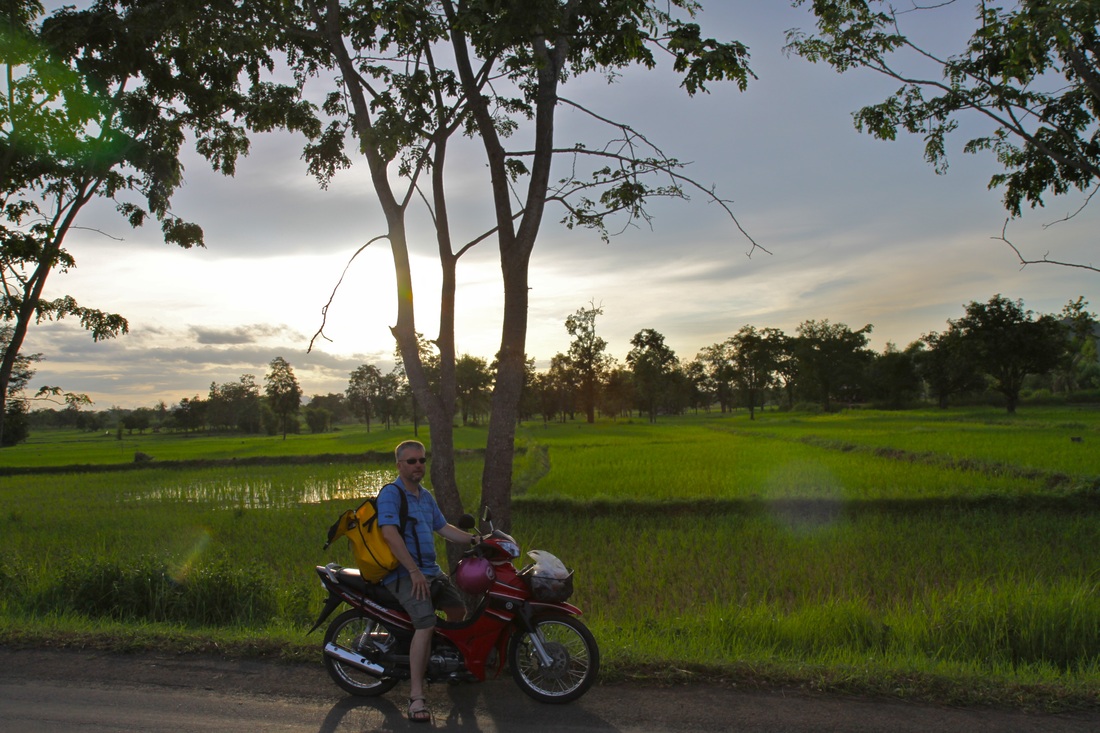 Cruising along the countryside

Cruising around with motor bike is a nice way to discover the Isaan countryside. You find small shops in every little village where you can buy drinks and local thai food. Our favorite local speciality is noodle soup with chicken meat and vegetables. To give the taste a boost to perfection you add some chilli, lemon and fish sauce. There are also many temples which are worth visiting. Here you will find it a real advantage to have someone with you who speaks Thai, since all the road signs and village names are in the Thai language.

I like to eat much, sometimes a bit to much. I’m also curious about local specialties. I like to try everything which can swim, crawl and fly. I like to try that little local place in the corner and every time I hope I can discover a new gold mine in terms of taste experiences. Well that can sometimes be a very bad combination. Maybe somebody will be disappointed now because I have no messy story to tell! Why? The simple reason is that I have never been food poisoned in Thailand! 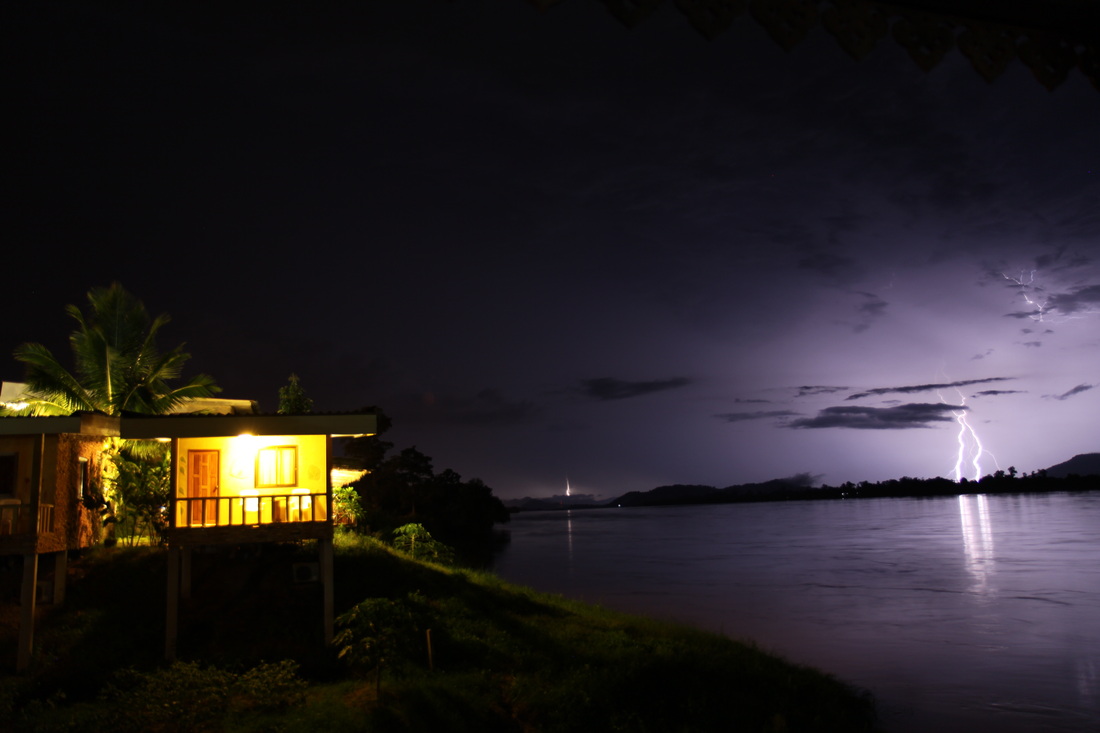 Our plan was to go by car to Laos. But we had some serious bureaucratic trouble at the border with the Thai authorities so we had to change that plan. We decided to make the 800 km trip from Nong Khai to Chiang Mai. We took the beautiful road along the Mekong river which follows the border to Laos. This very evening we stayed at a beautiful guest house situated on the river bank to Mekong. We witnessed a spectacular thunderstorm followed by a cloudburst of monumental proportions. 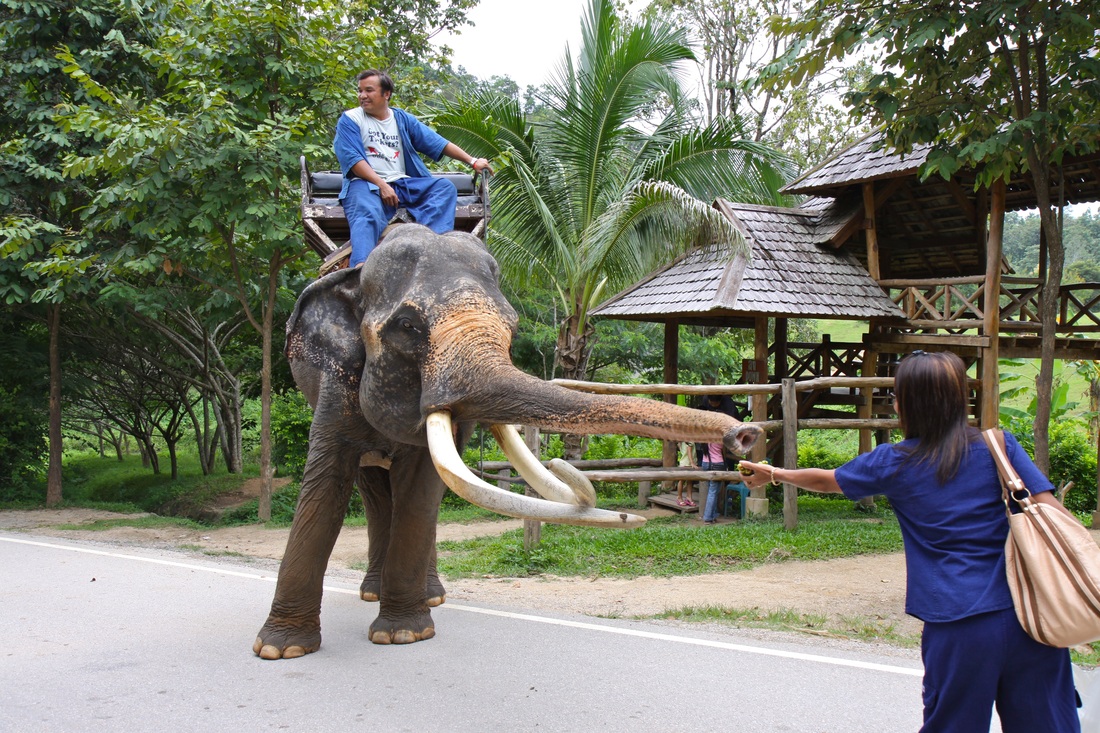 On our way to Chiang Mai we passed the city Lampang. They have some interesting things to see. For example the worlds first elephant hospital. You can also do the usual stuff such as elephant riding and have a look at the elephant show. We did everything. Unlike other elephant shows which I have seen before, was this one very interesting. They showed how they used to work with the elephants in the woods, working with timber, moving logs etc. Here Amporn was a bit anxious when she was giving the elephant some mankuts.

I don’t know what the temperature is just now and that doesn’t really matter. The only thing I’m aware of is the heat, where ever you are it’s simply to hot! My brain has gone bazooka and I have difficulties to follow the easiest logical reasoning. I have tried ice cold Coke, water with ice, a high speed fan and nothing really helps. Apart from a powerful AC-unit of course. But unfortunately for me I have no access to AC for the moment. So I just have to live with it I guess. 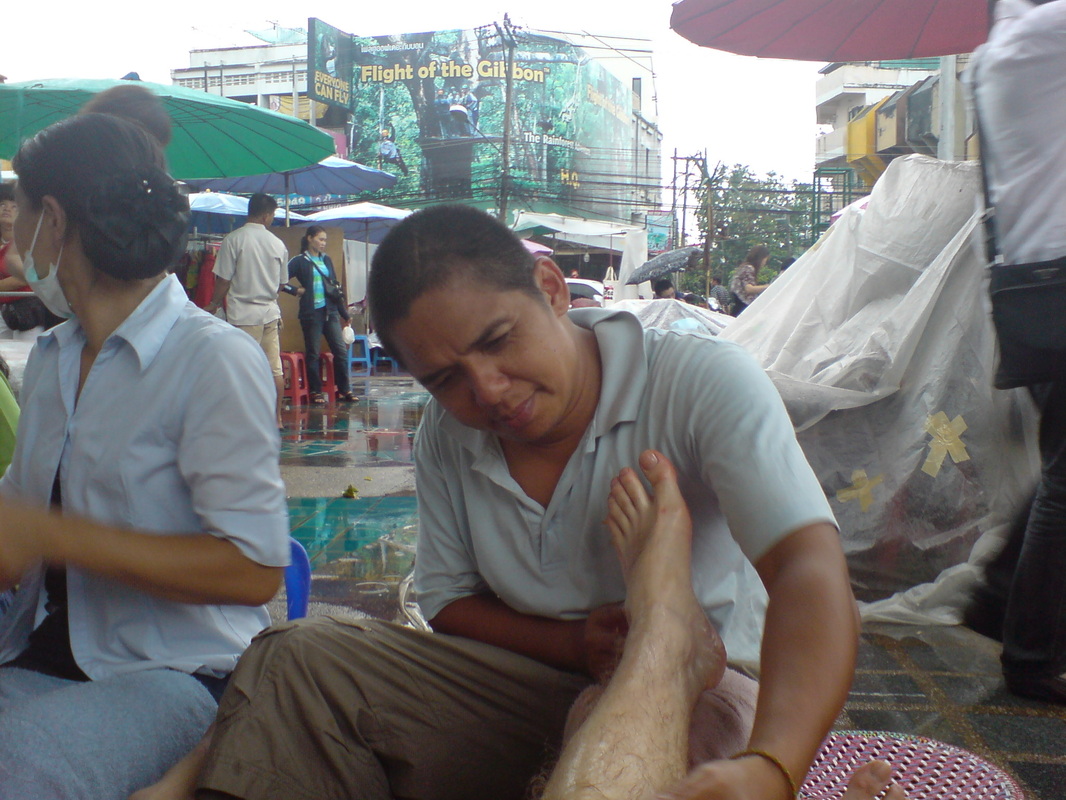 This day in Chiang Mai we were surprised by heavy showers. Nowhere to hide so we decided quickly to get a foot massage. Frankly I would have preferred the gentle touch of a beautiful woman but I got this guy instead. I soon realized that he was more suited for massaging an elephant or something else very big creature instead of me. Because he was really the opposite (in every way) of a beautiful woman’s gentle touch. I was keep telling him to ease down all the time but soon he had forgotten about it. My only benefit from his treatment was the protection from the rain and pain in my legs! 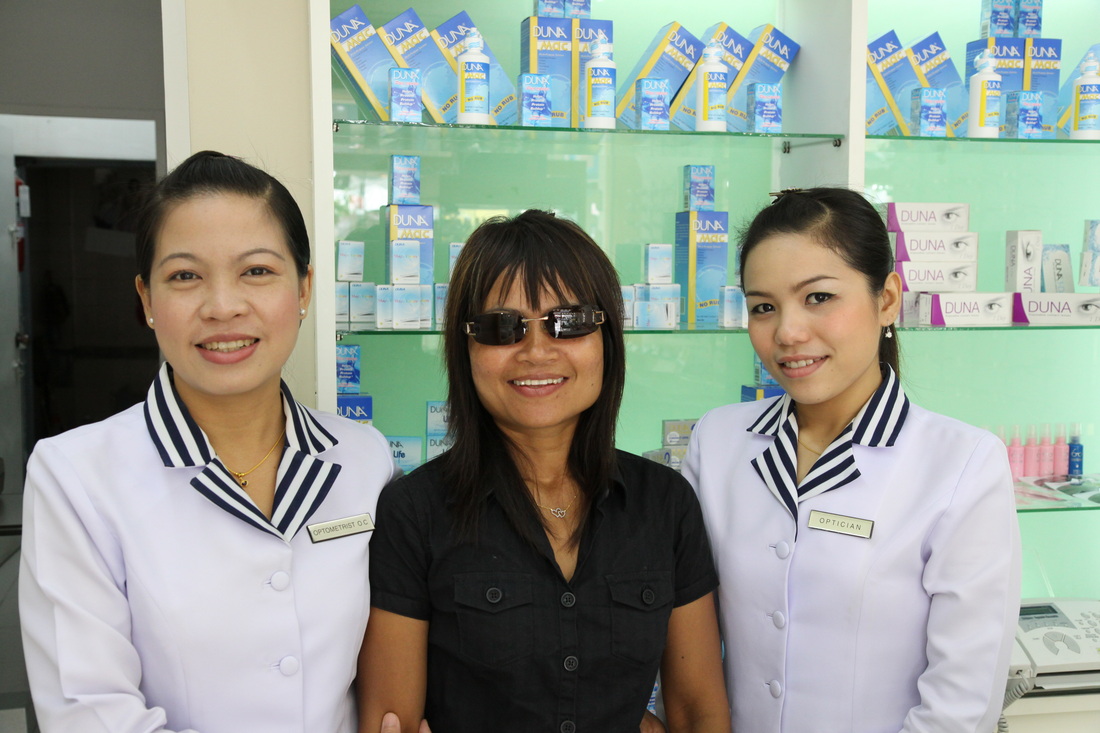 One thing in Thailand which is extra price worthy is to go to the optician. Doesn’t matter if you are after sun glasses or real eye glasses. You will be met by professionalism and skill and have a wide variety of frames of all the quality brands to choose from.

In Chiang Mai we visited the temple of Wat Phra That Doi Suthep. We are posing for the photographer in front of the long flight of steps, lined by ceramic-tailed naga (dragons), which leads up to the temple. Doi Suthep is situated 16 km west of Chiang Mai and from there you have superb views over the city. 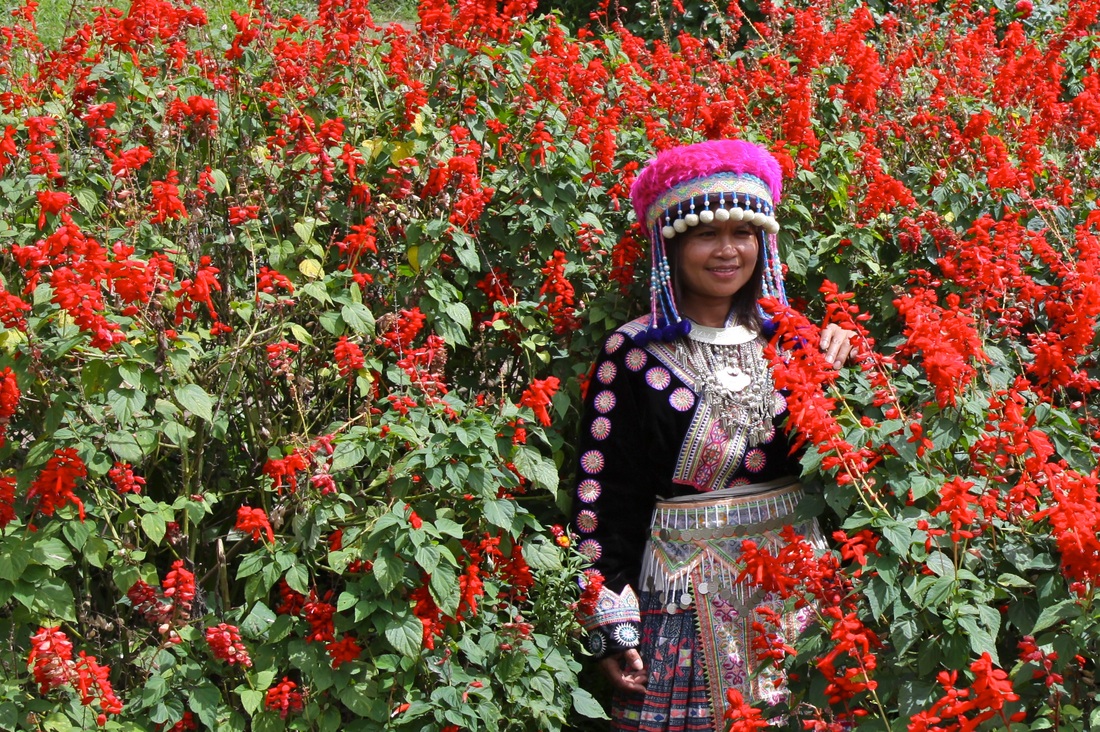 More than 700 km north west of Bangkok, Chiang Mai has over 300 temples – almost as many as Bangkok though the city is far smaller in area. Despite tourism, which is the city’s number-one source of revenue, Chiang Mai is one of the least expensive large cities in Thailand. This pictures was taken in Hmong village around 20 km from Chiang Mai which was a beautiful village surrounded with slopes full of flowers.

Yep, I went down for food poisoning for the first time in Thailand! As I bragged about it earlier it never happened before. So for a few days now I been resting, eating rice soup, drinking tea and other brews made of local herbs which Amporn claimed should be good for a poor guy with a running stomach. Well, finally I can now feel my strength slowly coming back and I am soon ready for my first Coca Cola with ice! The noodle soup on the picture above has nothing to do with this incident. 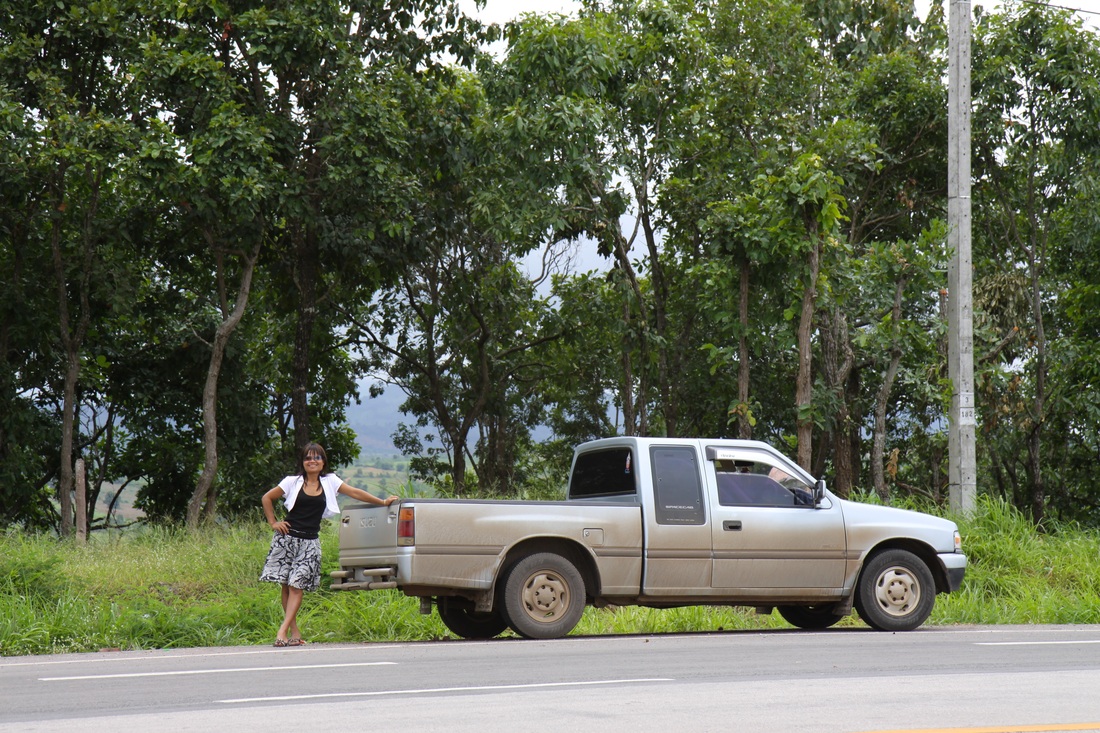 We made over 2000 km with our Izuzu truck. From Udon Thani via Nong Khai to Chiang Mai and back. Mostly on good roads but further up north there were many winding and steep roads. Before we left I replaced all tires with new ones and changed the engine oil. Our Izuzu is sturdy and reliable but without AC which means you will getting tired by the heat after a couple of hours. The traffic in the larger cities was chaotic but we didn’t have any incidents what so ever. Sometimes we encountered heavy showers which made it impossible to drive. When that happened the only thing was to pull over on a safe place and take a break. 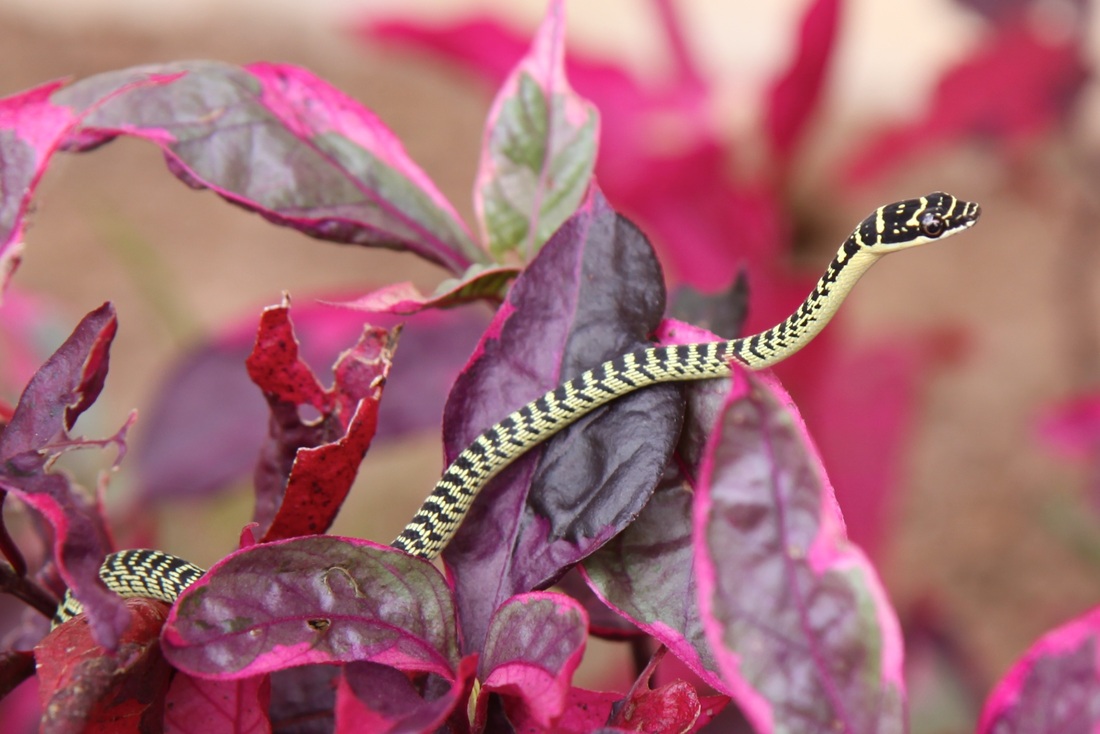 This morning when I was peacefully sitting in the living room with my computer I was suddenly interrupted. Amporn was outside calling me. I slowly moved out to see what had alarmed her. When I realized what it was all about I sprinted inside the house for my camera. The snake moved quickly and smoothly and preferred the top branches of the bushes. I shoot some images and then I moved the snake out from the garden. It was tiny and the length was around 35 cm, probably a juvenile. If you know what species this is you are welcome to make a comment! 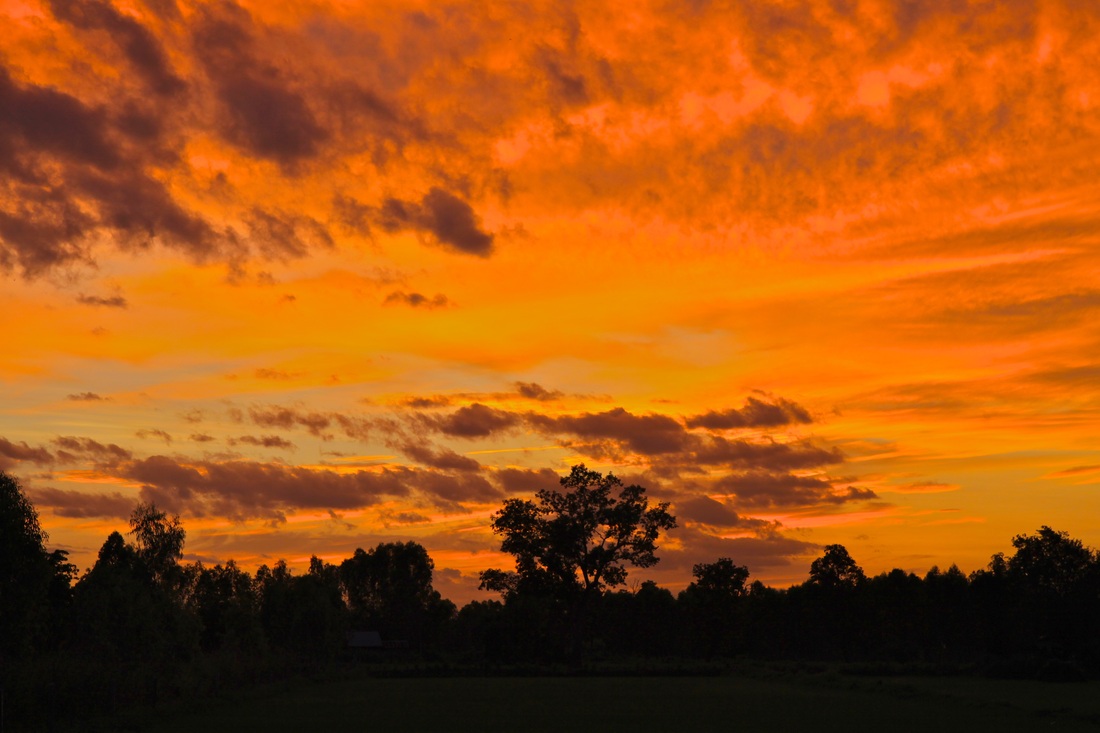 The North-Eastern Thailand where we live, is the least visited region of Thailand, although there are a number of places of interest here, and in many ways it’s Thailand’s most culturally traditional region. The lack of tourists can be attributed to the region’s proximity to Laos and Cambodia, and the history of holds-ups and communist guerilla actions in the 1970s and early 1980s. Nowadays it’s as safe to travel here as in any other part of the country. Among North-Easterners, this region is know as Isaan. 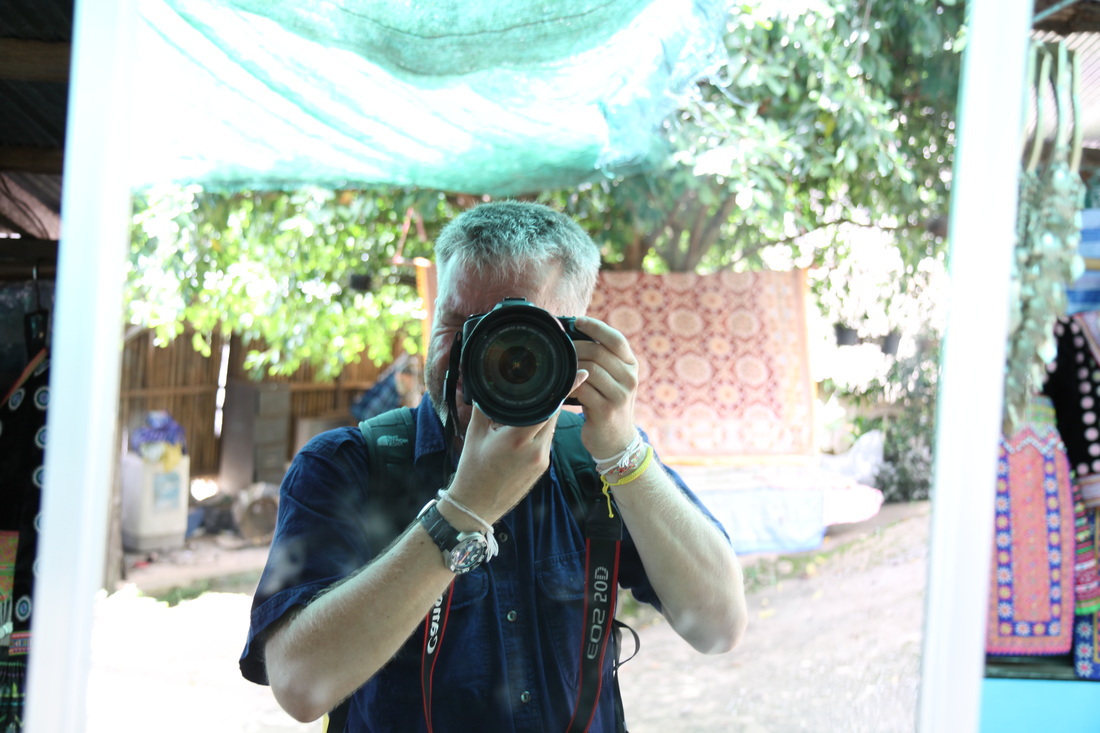 All systems are now up and running smoothly after the food poisoning incident for a few days ago. I’m eating and drinking in normal quantities which means above normal comparable to a normal person. I’ve just finished a Coke and will soon start with another. :-)